The birthday girl and recipient of the cake and cupcakes emailed this lovely note and also included some pictures and story behind the guinea pigs:

“Just wanted to thank you so much for the incredible birthday cake you
created!! It not only looks amazing, but also tastes amazing. I have
been emailing photos to friends, and my sister who ordered the cake.

The guinea pigs came for a rescue group called CDART,
which is a branch of a larger group called Critteraide. I fostered 9 guineas.
I kept these two (Courage and Winnie), and the other seven I adopted out.” 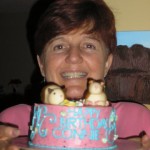 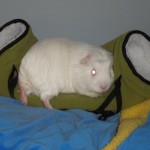 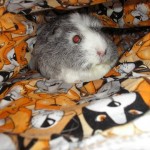 She also sent pictures to the head of both of those groups. To learn more about their commendable work visit their site at http://www.cdart.org/ 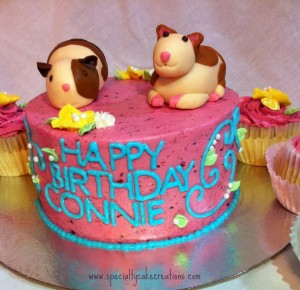 A customer contacted us from Ontario for a birthday cake and cupcakes for her sister here in Kelowna. She asked to include a little hamster and guinea pig as cake toppers.

Fitting for the upcoming Easter celebrations the colors were chosen to be pastel spring colors. The side of the cake was decorated with piped scrolls and edible pearls. Spring flowers were included on top of the cake as well as on the cup cakes.

The cupcake liners were colors coordinated with the cake in pastel yellow, pink and blue. 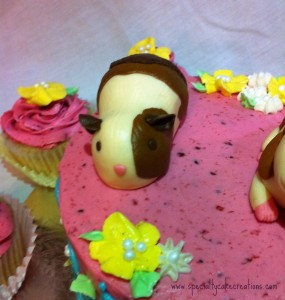 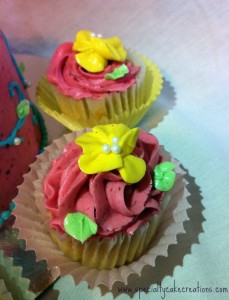