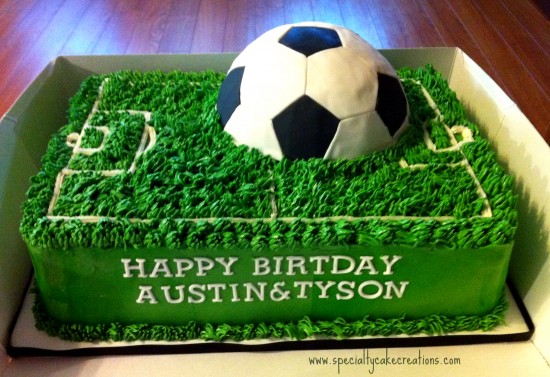 The “Chinook Hammers”, a soccer team from Calgary, were visiting Kelowna for a tournament.
During their time here two of the boys were celebrating their birthdays.
What better idea could there be for birthday cake than a soccer field with a giant soccer ball.

The soccer field was a large chocolate fudge cake with chocolate buttercream filling frosted in vanilla buttercream tinted green. Field markings were piped on in white and buttercream grass in green. 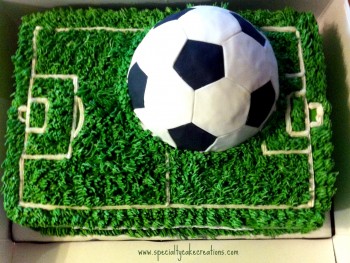 The soccer ball was made in the same flavors and then covered in black and white fondant patches to match the actual soccer ball pattern.

The birthday boys names were written on the side on the cake from fondant letters (Luckily I realized before delivering that the H in birthday was missing and added it quickly. But I didn’t have time to take new pics).

– I baked the soccer ball in a Sport’s Ball pan. It has very handy templates for different sport’s ball patterns. I got the templates for the black and white fondant patches from it.
– For the writing I used alphabet tappit cutters.
– For the grass pipings I used a multi-openings tip. It also works great for piping hair.