For a 30th birthday party I received this unusual request for a He-Man cake and cupcakes of the Masters of the Universe show’s characters.

I myself, unlike my husband and my sister, was not familiar with this cartoon hero, at all. It must have been around when I was growing up but somehow I never got to know the Masters of the Universe.

All of this was to change with this order.

The customer provided me with a number of pictures of He-Man and all the characters. So it was time for me to get up and close with them. At some point in time (1983) Wilton actually came out with a cake pan that would produce a He-Man shaped cake.

I used some of those cakes as inspiration for this cake which was carved from a large sheet cake. The vanilla bean cake with chocolate buttercream was covered and decorated in fondant to make to look like He-Man in his armor. 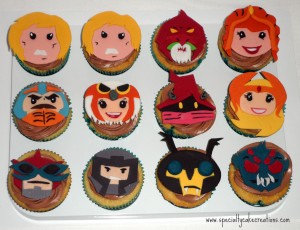 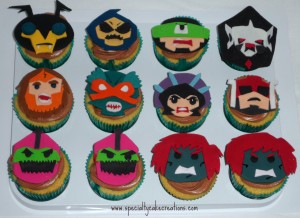 I would love to hear if you are familiar with this action hero at all?